Sand is a frequent visitor for oil recovery. Some oilfields have high cut, some have low cut. But no matter how much content the sand takes, we could never ignore its influence during oil production.

So what influence will the sand exactly bring to us ? The following are just some example:

1). The sand will increase the abrasion of barrel, plunger ,standing valve and traveling valve, which will greatly reduce their service life.

3). Sand will bury the sucker rods when stopping the pump. It will cost us a lot of operation time.

From the above 3 items, we can see, and can really bring a lot of harm on our equipment, pumping efficiency and operation time. For now, there are a few technologies about how to solve sand problems during oil production, like adopting a hydraulic jet pump to flush out sand, mechanical anti-sand technology, and chemical anti-sand technology. Today, I would like to introduce you the special downhole pumps developed by Sanjack. Hope they can help you get an idea about how the downhole pump can control sand during production.

The sucker rod pump is a common down-hole device driven by the pumping unit to pump the crude oil in the well to the surface, an important part of the artificial lifting system. The safety and reliability of pump operation and long inspection period are critical, which can greatly reduce the loss of operation time and increase oil production. But for heavy oil wells with high sand cut, sand stuck failures will occur from time to time, seriously reducing the profit of crude oil production.

At present, the sand control pump used in the oil field is mainly a long plunger sand control pump. The pump is equipped with a sand trap barrel and there is a section of tubing at the lower end of the pump as storage of sand trap. The tail end is sealed and crude oil is injected into the side hole of the sand control joint of the bridge hole at one end of the pump. But due to the larger diameter of the sand control joint and the smaller gap between the casings, it is easy to form a sand bridge at the oil intake hole to block the oil intake hole during operation, causing difficulty in pumping crude oil and affecting the production of crude oil. In severe cases, pump inspection is required, resulting in waste of operation time. 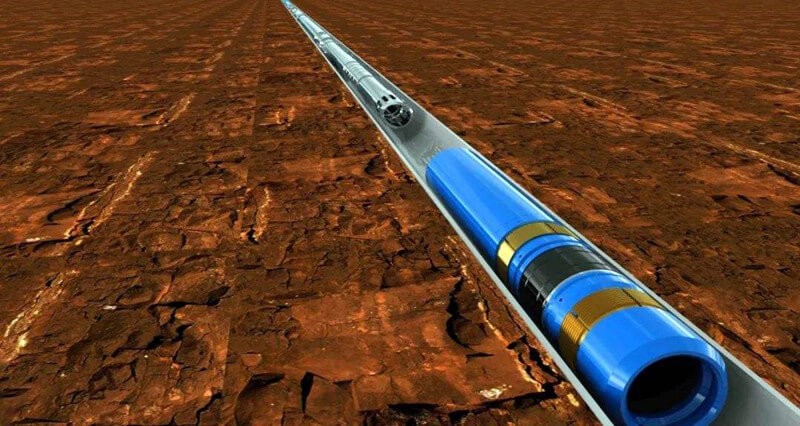 This patent introduces a sand control pump without a bridge-type sand control joint, where crude oil is directly fed from the bottom tubing. It avoids the phenomenon that the sand bridge blocks the oil inlet hole caused by the side-feed, and because of its special structure has a certain feedback effect, so it can be applied to heavy oil sand wells.

The structure of the oil pump is as follows:

Therefore, a hydraulic feedback force is generated during the oil suction and discharge process in the lower annular space of the pump plunger, which can cause the pump plunger to descend.

Therefore, the pump can be applied to general heavy oil well production. When downstroke, the sand on the plunger of the pump barrel is scraped off by the conical surface on the upper centralizing joint and the plugging or stuck pump phenomenon will be avoided.