How to achieve ultra-long stroke in oil pumping？

How to achieve ultra-long stroke in oil pumping？

Worldwide, as conventional oil resources are depleted, the reciprocating sucker rod pumping systems are recognized as the most widely applied mean of artificial lift system for onshore wells. The popularity of this system is attributed to its durability, simplicity, and flexibility. The advanced technologies in surface and downhole equipment overcome many of the old problems, such as; producing difficult fluids (high gas and/or sand, corrosive fluids and heavy crude) and producing unconventional wells.

The necessity to maximize production and produce difficult fluids in higher economic efficiencies for rod pumped wells has created a high demand for ultra-long stroke lengths and high capacity units.

What needs to be explained is that the plunger of the sucker rod pump moves up and down in the barrel structure for one stroke at a time. In order to achieve an ultra-long stroke, a long barrel structure is required.

The pump barrel structure must be installed on the spot with a friction clamp tool, which is more troublesome for special personnel to operate. The sucker rod pump has the problems of difficulty in preparation and high cost in the actual production and installation process.

Therefore, the pumping passage of the pump barrel assembly does not need to meet the inner and outer diameter coaxial requirement that the degree does not exceed 0.1mm, which reduces the manufacturing and installation requirements of the pump barrel assembly, and alleviates the technical problems of the sucker rod pump manufacturing difficulties and high cost existing in the prior art. 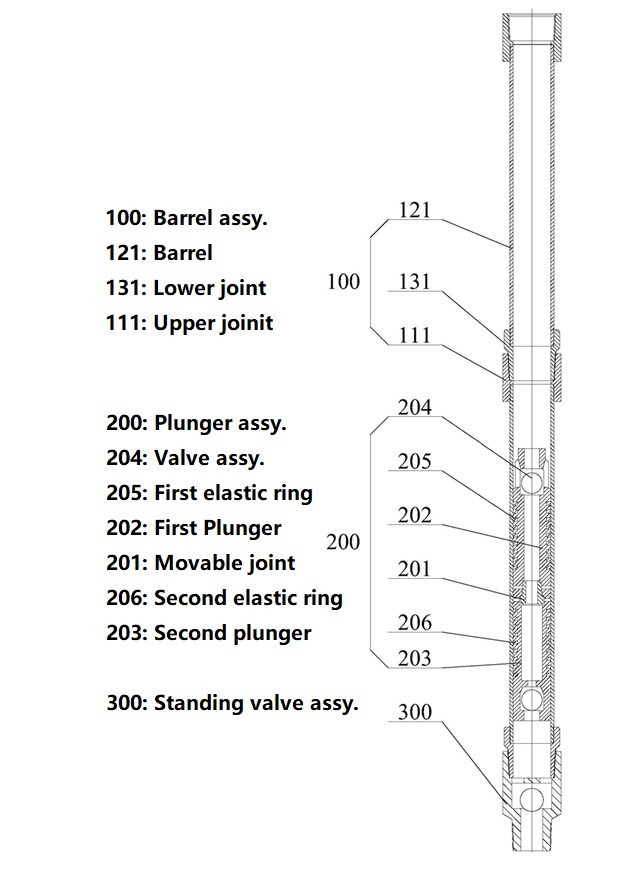